January has passed in a flash and while that pay cheque sits sweetly in the bank and some of you go back to alcoholic drinks after a month of abstinence and orange juice, we’re here again to roundup the biggest stories in PR and Social Media.

This month Leeds United caused outrage, H&M caused further outrage and an American YouTuber caused even further outrage. Without further ado here’s some of the biggest stories from January.

Leeds United get it horribly wrong:

We couldn’t be a PR agency from Leeds without covering a story right on our doorstep. If you haven’t seen this, Leeds United launched a new badge in January to celebrate its centenary year.

The process apparently took them 6 months and involved a consultation with over 10,000 people.

It seems to us like a classic University group project – lots of people involved, 6 months to do it, and the inevitable panic a few days before the deadline when no one’s done a thing!

The result was this, erm: interesting effort, apparently a nod to the ‘Leeds Salute’.

It’s safe to say it wasn’t well received by the Leeds faithful and received instant backlash online. Many comparing the badge to an early 00s Pro Evolution copy, when they didn’t have the rights to team names.

This resulted in a heroic response from Aston Villa, who pounced on the opportunity to rub salt in the wounds – a master stroke by their PR team.

However, just six-hours after the announcement was made, another one followed to confirm they had listened to the fans and would re-visit the design.

A genuine swing and a miss or a risky PR stunt? What do you think?

At the start of the month Swedish clothing brand caused a stir online after they featured a black child in a hoodie featuring the slogan ‘Coolest Monkey in The Jungle’. 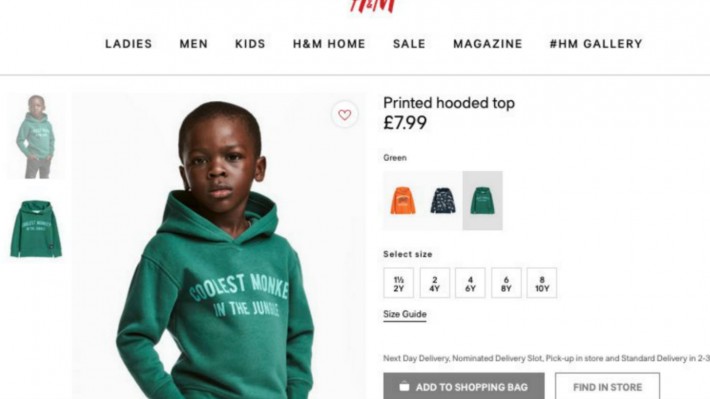 Social media erupted with theories, claims and indignation at the garment, many pointing out the obvious racial connotations involved, believing it was an underhand racial slur by the brand.

Some claimed that this was a blatant attempt to be controversial by H&M to gain global coverage and others leapt to H&M’s defence stating it was a simple ‘cultural misunderstanding’.

H&M apologised for any offence cause, but even that was torn apart for lacking sincerity. A lesson to everyone to triple check your marketing decisions before releasing them to the internet.

Controversial, ill-thought out decisions seem to be the theme of January’s social media news, and possibly the biggest one of all featured American YouTube ‘star’ Logan Paul.

Described by himself as a “severe and continuous lapse in:judgement, the YouTuber (whilst filming in a forest in Japan well known for its dark connection to suicide), filmed the body of a man who had recently killed himself.

Paul, and other people in his party were then filmed laughing and joking around the body, which lead to him being labelled insensitive, amongst other things.

After what seemed like an eternity and countless calls to ban Logan Paul from the platform, YouTube eventually responded by dropping him from ‘Google Preferred’ and cancelling his ‘Originals’.

Following a short break from posting daily vlogs, Logan Paul returned to the platform, to again apologise for his actions and to pledge to use his channel and his considerable wealth to help raise awareness about suicide.

Was his recent video just an attempt to improve his tarnished reputation or has the ordeal genuine changed his outlook on life?

Some other social media-y stuff:

Some other big stories worth mentioning; YouTube has made some changes to how it monetises its channel which has been seen as potentially damaging to smaller content creators. Schools have been urged to help pupils traverse the world of social media. And Donald Trump joked about having a bigger red button than Kim Jong-un – because potential nuclear war is a laughing matter apparently.

January has certainly been a busy one! Maybe as there’s only 28 days in February we won’t see as many mishaps and mess-ups, we’ll see you here next month to find out if that’s the case.