As the sunshine started to peak through the clouds and hinted towards what might resemble the start of spring, “the beast from the east came storming in and put an end to any thoughts of us packing the winter wardrobe away just yet.

Stormy weather seems a good analogy for the world of social media and PR in February, with Snap Inc. struggling through a turbulent time, KFC dealing with apparent famine and a new(ish) social app threatening to make waves.

Has anyone ever updated a social media app and not instantly received a fierce backlash and calls for it to go back to the way it was?

When will they learn that nobody likes change!

In what was probably the biggest over reaction of 2018, Snapchat sent millions of people into meltdown by changing the layout out the app.

There was even a petition with over 1.2 million signatures demanding the app reverse the latest update.

Not only was everyone really annoyed about the changes, but things got much worse, as on Thursday (22nd) Snap Inc.’s stock plunged 6% wiping $1.3 billion off its market value.

Some blamed reality star Kylie Jenner for the drop in value, after she posted a tweet which hinted at the fall in popularity of the app.

Maybe the key to end all conflict and solve world hunger lies in the tweets of Kylie Jenner, if you’re reading this Kylie, try tweeting “sooo does anyone else not want war anymore? Or is it just me… ugh this is so sad. – Here’s hoping!

So, you know the fast food company, Kentucky Fried Chicken?

Well in February they ran out of chicken. 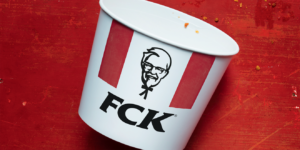 In what has been referred to as ‘Chickengate’, ‘The Great Chicken Shortage’ and the ‘KFC Crisis’ the fast food joint had to close almost 600 of its stores due to a logistical error.

Thankfully this was only the second most over the top meltdown of 2018, after people lost their minds of a Snapchat update. This story resulted in some of the most ridiculous news coverage ever seen and the BBC actually interviewed people fuming that they had to go to Burger King for their dinner. (Yes, that genuinely made the national news people).

However, enough of the back story, that’s not the bit we’re here to talk about, but KFC’s response to the crisis.

We talked earlier in the month about people appreciating a brand that can hold it’s hands up and take the mick out of itself, and that’s what KFC did. After reopening 700 of its 900 stores, the chicken shop took out a full-page advert in The Metro newspaper to say ‘FCK, we’re sorry’.

The back end of February saw the emergence of a new(ish) social media app ‘Vero’. This app started gathering pace with influential instagrammers joining en masse. Don’t fear, if you’ve never heard of it, our Director has written a post to bring you up to speed.

Also in February, great news for those who love the finer things in life as Airbnb¢€ž¢ Plus launched and social media networks were accused of failing to deal with cyber-bulling.

While you brace yourself for the usual social media announcements that confirm beyond doubt that white stuff is in fact falling from the sky, we’ll be keeping an eye on everything newsworthy in the industry. Check back here next month for another roundup.